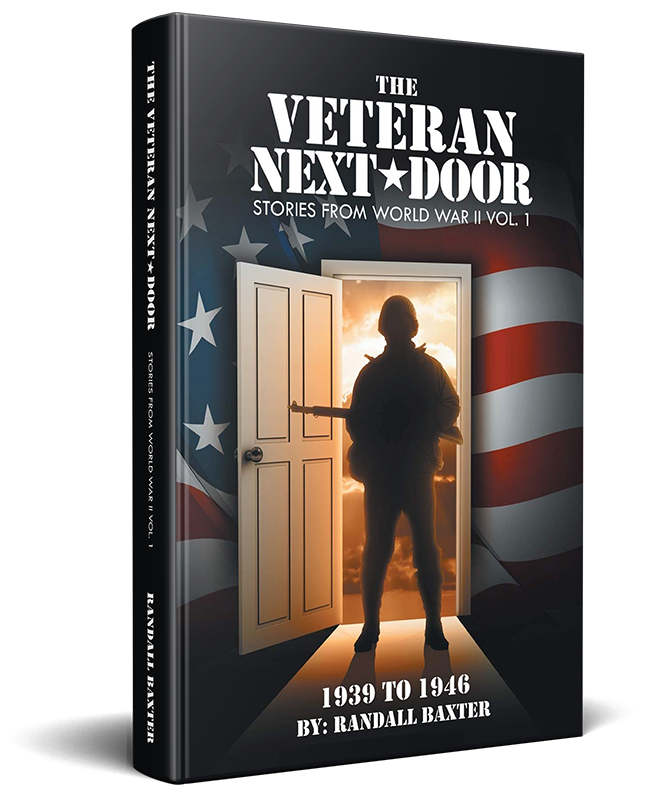 I graduated from the University of Tennessee, and was an instructor at a small business college. After leaving the education arena, I became an Agent for the New York Life Insurance Company. Eventually opening my own Registered Investment Advisory called Asset Positioning Services LLC. In 2010, the opportunity to write, produce and host the radio program, THE VETERAN NEXT DOOR was offered, and this led to becoming a volunteer veteran advocate helping war era veterans learn about and obtain Veteran benefits. This is how I learned the stories you are about to read.

THE VETERAN NEXT DOOR

THE VETERAN NEXT DOOR, a compelling collection of stories told by the veterans themselves from the battlefronts of World War II. Share their lives, losses, and heartaches, all up close and personal. A young Jewish girl trying to not be sent to Auschwitz, to Guadalcanal, Bougainville, Atlantic Naval battles, Mediterranean, and against Kamikazes in the Pacific. Experience becoming a prisoner of war during the Battle of the Bulge, fight across France and Germany with an awardee of the Medal of Honor, and a young private who did not know what to do. Then there was the battle of Athens, Tennessee.

GRAB YOUR COPY NOW
GET IT ON AMAZON

VIETNAM ON THE OUTSIDE LOOKING IN

The story of how Americans could not separate an unpopular Vietname war, from the soldiers they sent to fight it.

History and stories as told by Vietnam War Veterans ordered to fight the controversial war. These soldiers did not receive the acknowledgment they deserve, and many came home with wounds no one could see.

GRAB YOUR COPY NOW
GET IT ON AMAZON

“Mr. Baxter: I am George Harper’s sister (Joyce Harper Scobel), Linda Harper is my niece and in memory of her father, George, she sent me and my other living siblings an autographed copy of your book. George was the marine in your book Chapter 4. I received the book this past Saturday and completely enjoyed all the stories and of course cried over Chapter 4. I also would like to order couple copies of the CD of the radio show “3rd Marines Guadalcanal and Bougainville”. Thank you so much for such an interesting book of battles of WWII, certainly not things”

“The number of surviving World War II veterans has slowed to a trickle, but those who remain recall vivid memories of their time defending the country. Their words and emotions are shared in this touching and informative nonfiction book.”

“Heroism, horror, sacrifice and the challenges of returning to civilian life are examined in these accounts collected from unsung veterans of the second world war.. a stirring patriotic tribute.”

“Randall Baxter was never a soldier, but soldiers have always been his greatest heroes.. he’s made it his mission to make sure they are not forgotten.”